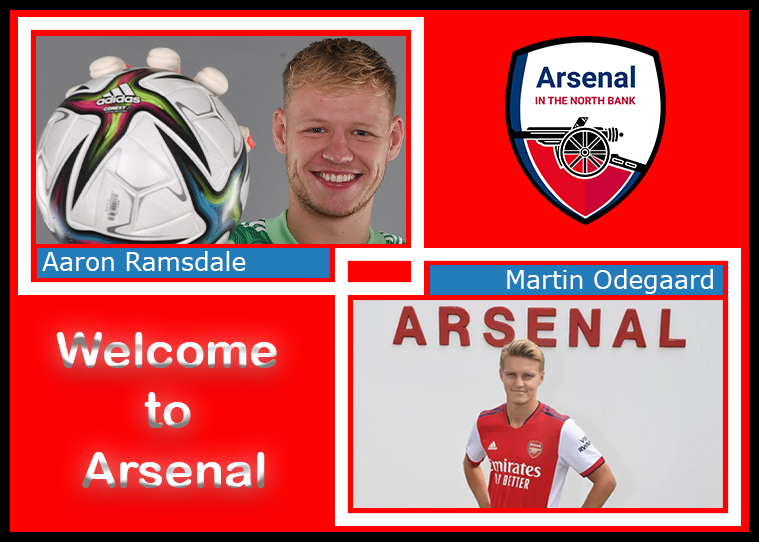 So this morning we woke to the news confirming the re-signing of Norwegian captain Martin Ødegaard on a permanent deal after a decent half season loan with us last term.

A fee of €35m (A smidge over £30m) was agreed with Real Madrid with add ins making the deal close to €40m. Importantly we hold the card with this deal where no buy back clause has been included so we are in control moving forward but have given the Spanish side first refusal should we decide to sell.

There is no doubt that this signing was a real good bit of business and can only help the club over the coming years. Certainly a deal which looked very unlikely to happen last season. Ødegaard taking the number 8 shirt and continuing the legacy of great players to wear that number. Hopefully he can show his best form in that shirt and become a legend at the club. He certainly has time on his hands at 22 years old.

Later into the afternoon after his medical and media day duties we welcomed Aaron Ramsdale to the Club. A deal was negotiated for a while with Sheffield Utd accepting a bid of £24m with additional add on when/if he becomes the number one keeper at the club.

There has been much negative comments and behaviour about the player and he has received lots of abuse on social media. How can these people call themselves fans vilifying a player who hasn’t even signed on the dotted line or even kicked a ball for the club. These people can only be described as vermin, people who we don’t want to associate with our great club.

I find this journey brilliant, I see this from a youth football coach and as a fan. You talk about having dreams, growing up and playing for a big team or just getting on the ladder. Ramsdale has done that and to see a booming smile on a player whom just wants to improve and learn to progress further and to see that contract signing photo with his parents and family bought a smile to my face.

I believe that Aaron Ramsdale will progress and he will eventually become number one, maybe not this season but certainly in next 2 years he will be knocking. This is dependent on the form of Leno whom hasn’t set the world alight with his performances. Yes on his day a great agile shot stopper but the times that errors and poor decisions and judgement has cost us goals and points makes it a little easier to see Aaron taking on the starting berth.

Leno has two years left on his contract and at £100k a week we may see Arsenal cash in on the German whilst they can still command a fee for him. The main concern here is that can we afford to have another high earner sitting on the bench if his form drops further.

I, for one will be supporting this young English Goalkeeper, the last English goalkeeper to sign for Arsenal and get pelters when he signed was David Seaman. The rest was history as Seaman rewrote people’s views on him to become one of the best English goalkeepers of all time.

Come on Arsenal fans, let’s get behind the lads.