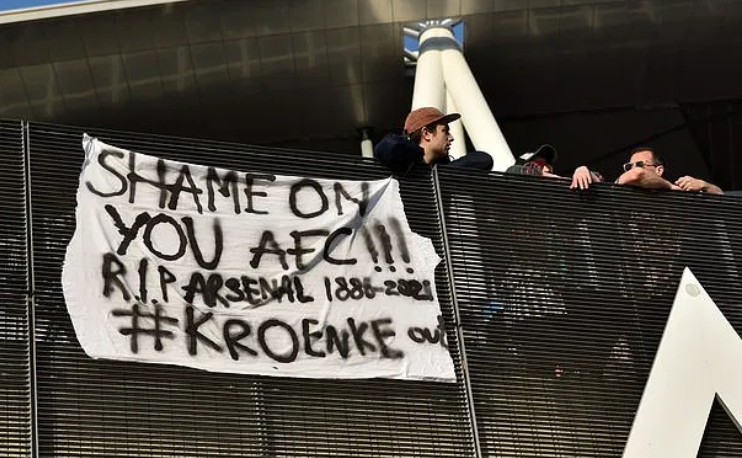 We despise the plans for the breakaway European Super League which will cause the break up of 150 years of institution of the English game.  Our club has signed a contract to become a founding member of this League. At this point I can only draw a line now on our decorated, pristine way of behaving. Our traditions, our class, the Arsenal way, they are all gone.  They have all died after this announcement and as a club we are no longer The Arsenal.

2018 was when the club were placed in a coma, when KSE acquired 100% ownership and we now see ourselves here today with no consultation with our ‘owner’.  Our Supporters Trust (AST) has been treated with distain in this and the club have gone totally the wrong way about this whole issue.  We urge all Arsenal fans to join the AST (https://www.arsenaltrust.org/) to help fight this alongside other clubs fans who are putting rivalries aside to fight this common issue.

Manchester United, Manchester City, Liverpool, Arsenal, Chelsea and Tottenham are joined along with AC Milan, Atletico Madrid, Barcelona, Inter Milan, Juventus, Real Madrid having all joined as ‘Founding Clubs’.  A further three clubs will be invited to join the League.  This competition is based solely on protecting status for these clubs with a closed ship system with no relegation and membership is not based on competitive merits.  It is disgusting to see and hear the support of this competition and those trying to defend it, that is from the investors JP Morgan and the 12 ‘greedy’ owners of the clubs.

They have used the pandemic/ and the financial situation as the main reason to make this happen and make it seem like it makes sense.  It is hypocritical of certain clubs in this group of clubs whom have driven up player fees since 2003 in the Premier League when Abramovich took over Chelsea, 2005 when Glazers started to buy up shares, the Arabs buying Manchester City in 2008 and all the way through to 2018 when Kroenke took full 100% ownership of our great club.

UEFA/FIFA have had years to secure and make sure that global football is in a stable and secure way by introducing a salary cap globally so there are no areas where players can move to milk a massive pay boost. ie. like in China.

We cannot allow this to happen and I call on the UK Government to introduce a similar rule to that in Germany where clubs have part representation by the fans.  All clubs older than 100 years should be treated as protected institutions and similar to protected buildings as such.  No club such be sceptible to the possibility of decades of the clubs history being destroyed and the fans suffering the indignity of losing this great heritage.

It was great to listen to Gary Neville and Jamie Carragher speaking so passionatley about the game and everything made sense with what they were saying.  The current owners have no loyalty to the national game/ the league and the welbeing of the pyramid and this is where it needs to stop.  These owners want to milk every penny out of the clubs and the fact that the fans, the players or managers were not even consulted or told of the announcement shows total disrespect to all.

Fans of all clubs have to come together and we would love to hear for others regarding their thoughts on this so get in touch with us on social media.