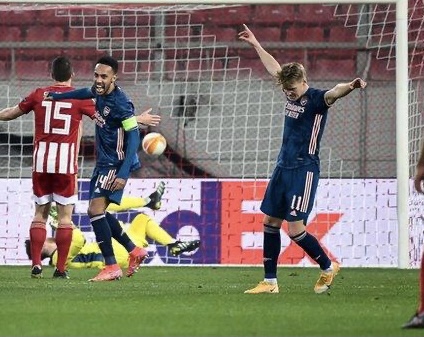 It was a fantastic performance on Thursday. We played with a great tempo and when out of possession we were excellent in the press to win the ball back. From the start we were impressive with Odegaard pulling an early shot wide when found by the penalty spot. On 5 minutes Aubameyang had a header well tipped onto the bar. On 22 minutes Aubameyang hit a strong free kick but was straight at the keeper.

On 33 minutes Odegaard moved forward after Partey intercepted the ball and unleashed a shot which was reminiscent of a 1990s football video game with a shot power up. It was hit with great technique and the shot flew in after the keeper got into a muddle on how to deal with it only managing to get a forearm on the ball before going into the net.

On 39 minutes we almost had a carbon copy of the Burnley game with David Luiz trying to play a ball through two oncoming players only to be dispossessed inside the area and a shot 10 yards from goal hit over. That was a warning sign.

The second half started and whilst we were in control on 57 minutes but when Gabriel played the ball to Leno, who was outside of his area on the right side. The keeper then played a soft accurate pass through a two man press to Ceballos who was quickly dispossessed and with Leno scurrying back into goal El-Arabi steadied himself and steered a shot into the net. Another goal gifted to the opponents.

This goal seemed to give the Greeks more confidence and so the game looked a lot more even. Arteta was looking at making changes as we were reaching last 10 minutes when a worked looping cross from a corner was clipped into the back post and Gabriel drifted in and leapt high and headed the ball into the far corner past the keeper to give us two away goals.

On came the subs and with us recycling possession the ball was passed into Elneny who had no one around him so moved forward with the ball and hit a low swerving shot away from keeper to give us three away goals and more importantly advantage going into the 2nd leg.