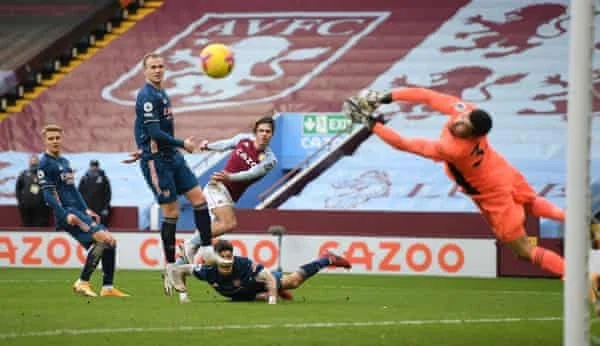 We come off the pitch today with some big questions. Where was the energy in our play?, where were the forward advanced runs? And what on earth is the point on VAR.

The game ended and took on a very similar feel to the game last season which ended with the same score line. We dominated possession throughout the game but with very little penetration in both games. When we did get free and create something with purpose we found an Aston Villa body put on the line to block any shot.

It was disappointing this time round as we started slowly and it was noticeable in the first half which team wanted the ball more when out of possession. Villa closed us down with purpose and with more endeavour making it very uncomfortable for us on the ball. We seemed slow to get forward or move with the ball and our passing was below what was needed.

A silly mix up between Cedric and Gabriel gifted Villa a goal inside 2 minutes. This set the tone of the game and it was another frustrating watch. Villa had a plan and there were some individual battles throughout. Saka had been targeted for close treatment and had been taken out a few times before half time.

One of those was when he was able to try and break away from Konsa and as he is just in front of the defender he has gone down with contact from the defender. There was an argument for a red card as he was the last man. But due to a covering defender and the distance to goal a yellow was produced and probably fair. Konsa though had a few fouls in the game and probably was lucky to have still been on the pitch.

Into the second half the game took the same feel. Possession but nothing else really. We saw another controversial decision where the referee game a foul on the goalkeeper Martinez, but when the replays were shown you could see that Martinez had a hold of Lacazette and dragged him down. It is strange that VAR didn’t take a look at it or at least ask the referee to take a look at something he may have missed.

That penalty was the last involvement for Lacazette and Aubameyang came on in his place. Ødegaard came on for 30 minutes and by then we were a very funny shape with both the young Norwegian and Smith Rowe on together and with Partey going off late on for Willian as a precaution as he obviously felt something not right.

Ødegaard was fairly tidy but missed a glaring chance when he opted for power over placement when found by Saka in the box. Villa had the better chances on the break and May Ryan had to come up with some important saves to prevent the score line changing.

Next up is a home game against Leeds Utd and we know this is going to be a test going by our recent games in the cup and league. The players have midweek off as we are out of the FA Cup so a chance to recharge and get an extended period of training.