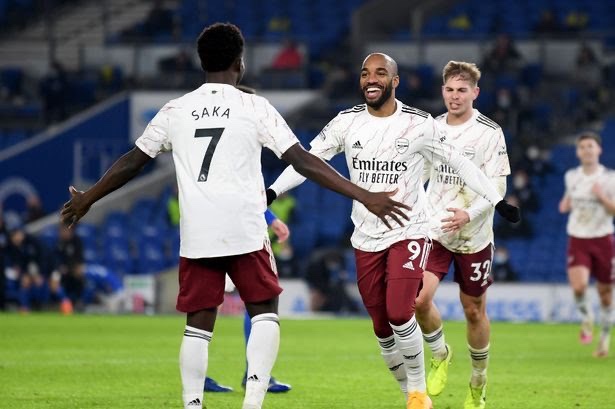 We finally said goodbye to 2020 as we ended the year with consecutive wins in the league. The first time since the start of the season. A familiar score line in Arsenal folklore, One Nil to the Arsenal would have been ringing out to greet the players in the stadium at the final whistle. Sadly we couldn’t be there.

There was a lot of speculation before the game as to who would start. I for one had hoped Arteta would keep the same starting lineup as they all played so well. I also understand the need to keep players fresh so had expected changes.

When the teams dropped I was pleasantly surprised with Arteta only making one change from Saturday seeing Laca drop to the bench with Aubameyang coming back through the middle.

This game was very important for the club and so was a must win game for us if we have any chance of salvaging a decent league position this season.

We started the game in an assured manner with some good possession from the back. For all of that possession there was nothing meaningful to it. Gradually Brighton were suddenly seeing more of the ball and as expected set plays could play an important part in this game. Brighton had a couple of chances which were blocked and cleared before Veltman conceded a free kick wide on the edge of the area. Xhaka not able to add to his goal at the weekend hit it over and not troubling the keeper.

Brighton had the better chances as we could not find the penetration in the final third and looked like our recent form had returned. I think that this is just confidence and not wanting to over commit in attack. We went in at the break with Leno and Smith-Rowe to thank. Leno getting down well to make a smart save and grab the loose ball and Smith-Rowe who managed to slide into dispossess Jahanbakhsh who was looking more likely to score.

So in we went with Xhaka’s free kick the only effort of the half. Much to be discussed in the changing room.

We came out for the second half with renowned belief, showing more desire and purpose to our game. So much so that we carved out five shooting opportunities within the first 10 minutes of the restart. Both Saka and Smith-Rowe were finding spaces and were able to get into the game setting up chances for Aubameyang and Martinelli.

Martinelli was substituted on 66 minutes with Laca coming on. Another good bit of management considering Martinelli has been out for months. The lively Bukayo Saka produced a great turn and the turned on the burners to go towards the area and then pick out Laca unmarked in the box and with the defenders retreating to the six yard box had time to control the ball and then curl the ball past a defender into the corner of the net.

The game flowed on with Arsenal in control as Brighton made changes, unfortunately Saka looked to have picked up a foot injury and he was substituted for Ceballos. However Arsenal were committed and positive in their approach and so were able to manage the game and see it out.

Man Of The Match – Saka