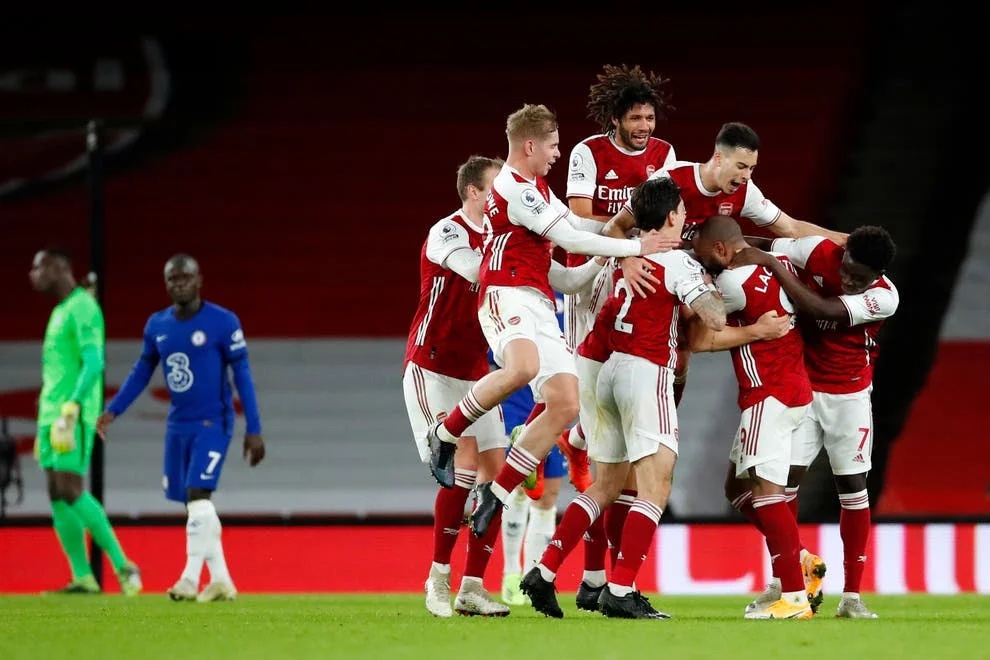 It was obvious that the nerves of all Arsenal fans were on edge. No win in 7 league games has seen us drop to the lower depths of the league. Putting this poor form together with Chelsea’s decent form which had seen them move within a win of 2nd place, it shows how tricky the game could be.

However, to make matters slightly worse for Arteta we found out that Gabriel was self-isolating due to COVID protocol. Adding to this both David Luiz and Willian were also ruled out due to illness. Due to this Arteta was forced into changes so in came Smith-Rowe and Martinelli along with Mari.

It was a decent opening 10 minutes and then Chelsea started to dictate play and had the lion share of possession. Just after the half hour mark Tierney got down the wing and cut inside, James, tried to chase him but a leg tangle saw the Scotsman go down for a penalty. Lava stepped up and coolly give the keeper the eyes and a delay in the run up saw the goalkeeper commit himself and Lacazette sent the ball into the other side of the net.

A dangerous free kick was awarded to us on 44 minutes. Lacazette and Xhaka lined up the free kick, but it was Xhaka’s moment and he stepped up and drove a curled effort into the net. It was a great strike and the keeper was only beaten because of the pace of the ball. It showed how much it meant to the players just before half time and to Xhaka who has again taken a lot of flack and abuse this season.

Half time came around and we deservedly went in 2-0 to the good.

The second half started with Chelsea making a couple of substitutions with Hudson-Odoi and Jorginho coming on. The game carried on with more of the same. We had bundles of energy throughout the team countering the Chelsea teams possession. The urgency to win the ball back as well as the midfield tracking back to make interceptions was clear to see. Chelsea were gathering control of the game after an angry team talk at half time fuelling their efforts.

On 55 minutes Leno started a move forward involving 10 passes ending with Saka receiving a pass from the impressive Smith-Rowe. Saka then hit a delightful curling lobbed shot over the Chelsea keeper into the far post and in off of the post.

Arsenal continued to create a few chances and could have been at least 4 or 5 goals up before Chelsea started to get some joy with their attacks. They scored with 5 minutes left plus injury time to give them hope and spurred them on to attack with more purpose and tempo and all Arsenal fans hearts were in their mouths when Mari bit into a challenge on Mason Mount in the area to give Chelsea chance to get to 3-2 in the first of five additional minutes. Jorginho stepped up and sent the penalty to the keepers left.

It was well struck to be fair but Leno made his mind up early and got down to make the save and collect the ball. Had they scored that the last 4 minutes would have been very uncomfortable, so after that Arteta made sure of the result by taking off Laca for an extra defender, Mustafi. The whistle blew and queue the relief.