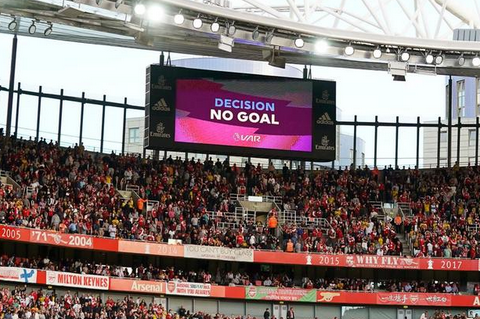 This season marked the arrival of new technology into the Premier League.  The idea or concept of VAR was to constantly check for clear and obvious errors when it was bought it.  The first look at this was in trials in the US in 2016, with the Australian A-League the first professional top flight league.  FIFA eventually approved the use of VAR in 2018 at the World Cup.

This use in the world cup was relatively successful and with this success, led it to be implemented into the 2018/19 Champions League knockout stages.

The use of technology was simple, to help get the right decisions and outcomes most of the time, it cannot always be 100% accurate but will positively influence decision making.

Instead we can see different variations of how VAR is interpreted and is used whereas there should be a global consensus so everyone plays and works to the same hymn sheet, so to speak.  We then have seen long standing rules being amended to suit VAR.  These being the offside and handball rules.

Three words for VAR.  Simple, Clear and Obvious.  So when you see VAR come in and want to see it work you then get the issues with uncertainty of the rule changes.  It clouds everyone’s judgement on the success of the implementation.

There has been so many issues with this and the perception of what is offside or not.  We saw earlier in the season issues with generated offside lines.  We are now seeing offside decisions and goals disallowed as a players toe is bigger than others or someones shoulder is offside.  All very marginal decisions, My question is what have we had to change the rule we have had in place.  Football has always had the rule that linesman if unsure or very marginal advantage goes to the attacking side.  Now with this rule change we are seeing the advantage given to the defenders with these decisions.  The back pass rule was bought in to make the game more exciting and I see this rule as similar albeit vice versa.

So we then go back to the main concept of VAR,  Clear and Obvious errors.  If a decision goes to VAR and the team cannot see clearly in real time. Then the goal is given as player is on side. If the player is level the player is onside.

This could have been so simple and no reason to change the rule and the perception of it.

Handballs and Fouls – Why the need for slow motion?

One other very frustrating part of VAR is the slowing down of handballs or fouls.  The frame by frame dissection of incidents muddy what also is a clear and obvious error.  Looking at these issues in real time is still key.  If these cannot be decided within a couple of real time replays and then a slow motion if needed.