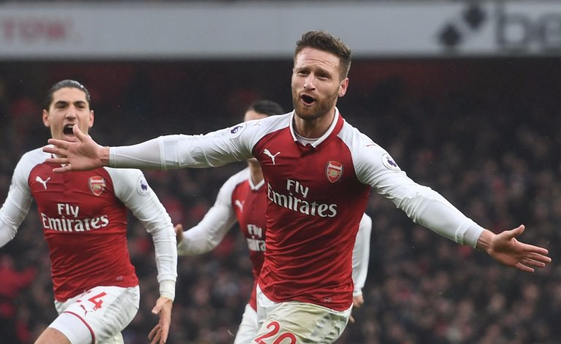 So with the UK transfer window shut we now still see the foreign clubs circling around our players.  We know there are players in the squad that we need to try and move on. One of these please who is causing a major stir is Mustafi.  Yes, this player came to Arsenal with a big price tag and at times he has proven to be an accomplished defender.  However the times that he has shown he isn’t cut out for the Premier League with a host of mistakes.

Most of these mistakes are down to poor judgement, decision making.  That doesn’t make you a poor defender, it does cloud judgement on him though. I lost count at the number of times he would go to ground or when pressurising the ball he would bundle the player over as opposed to keeping an arms length away making it hard for the player in the ball.  In amonst the bad stuff he have scored some goals too and he does where his heart on the sleeve.

Does he get to involved with emotion? Does he get caught up in things as he seems to be in ‘peddle to the metal’ mode?.  I do not think that the crop of defenders we have had at our desposal have really helped him.  I mean if you were looking to gain confidence as a defender playing in the team and the other players around them having confidence in the defenders you would struggle to.

Any defender we put in there would be left exposed and so would be sceptible to negative comments.  I am just not sure if we as a club are in a position to further weaken ourselves defensively.  I know Holding and Bellerin are on the way back, what we do not know is how they will handle getting back to regular football after their injuries.  God forbid that they do not breakdown or have any complications.

Personally I would be keeping him until January and by then we know how the season is going and gauge how well the defence has coped.   It would leave us with only 3 recognised centre backs and with a busy start to the season especially with Europa League fixtures will leave us massively stretched.

I do not like the mass witchhunts on social media about how this player is rubbbish, is this, is that.  These players play for Arsenal, We are Arsenal.  We are family until that time comes they they have to leave.  The club stays, the real fans stay. Players move on.  Support all we have equally.  Get rid of this negativity within our fanbase.