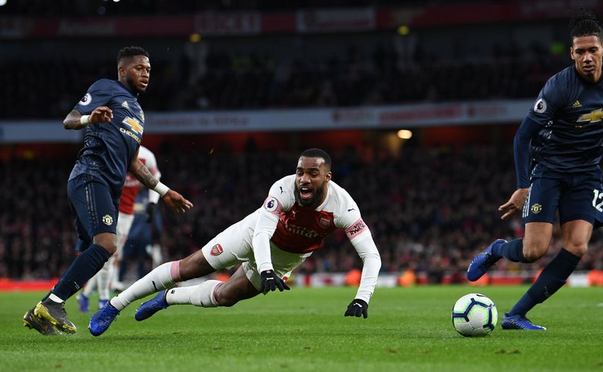 The atmosphere was electric and it was clear to both teams how important this game would be in the run in to the end of the season. We needed a big, strong performance to close the gap on Tottenham further as they seem to be out Spursy’ing being Spursy.

Emery named the team with some surprises. He went with a line up that consisted of both Ramsey and Ozil and also Lacazette and Aubameyang. It looked a very open, expansive team chosen against a very dangerous side but it would be good to see how well our players could get involved with each other. Fast movement and combination play will play a big part in getting something from the game as the Utd defenders do not like being turned around and being run at.

The game started well with a very high tempo with Arsenal controlling the ball and creating some half chances with a couple of tantalizing crosses from Kolasinac. It looked like Arsenal had turned up with a plan and the players were buzzing around. Utd were coming into this with huge confidence and after our performance on Thursday heads must have been down at some point.

After an early chance where we couldn’t clear the ball out of the box after a scuffed attempt by Lukaku bouncing a tap in onto the bar we moved the ball well with the impressive Maitland-Niles feeding a ball into Lacazette who controlled and held the ball up well to lay the ball out to Xhaka who then under slow pressure hit across the ball to wrong foot De Gea in goal to give us the lead.

Man Utd then had another chance with Fred hitting a shot onto the post and again an important save by Leno who thwarted Lukaku when one on one and rounded and he recovered to get a strong hand to the ball.

It was a worrying period for Arsenal as Utd grew more into the game and some good passing saw a cross-field pass by Pogba brilliantly controlled by Lukaku, who fed the overlap player and laid a cut back pass into Rashford but Xhaka showed great reading of the game to put his body on the line going in for a stretched challenge with both players in a lot of pain, Xhaka coming off worse.

The second half started with Utd pushing and stretching the game and a chance for Utd saw Koscielny make a solid block with his chest. The ball was worked well across the length of the area and a clever threaded ball behind defence saw Lukaku with a poor touch and Leno out again with an outstretched leg to deflect the ball over. Koscielny picking up a gashed leg in process

A good move released Lacazette into the box who has got in front of Fred and the Utd player leans on Lacazette making him lose balance and go down for a penalty. After the missed penalty last week I expected Aubameyang to let someone else take it. But such is the squad unity this year Laca encouraged Auba to take the penalty. Basically telling Pierre to get back on that horse. He stepped up and stroked the ball into the net sending the keeper the other way.

The game was controlled well and a hugely important 3 points mean that we are 1 point behind Tottenham, ahead of Utd and Chelsea. This means nothing though if we do not take maximum points from our next 4 games.