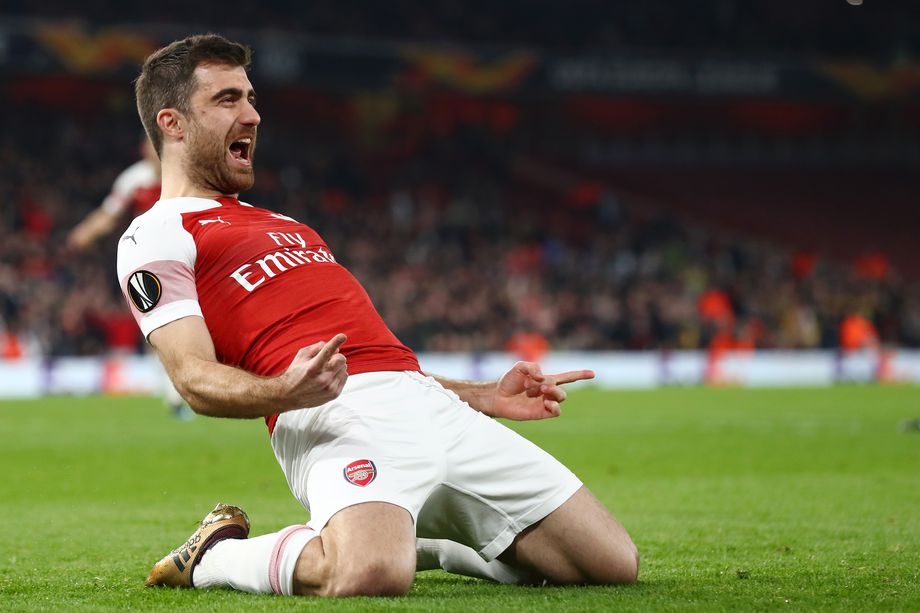 So after doing things the Arsenal way last week.  Meaning stressing out the fans and inducing mini heart attacks in the first leg losing 1-0.  Arsenal gave themselves a test for the return game.  I said in my preview the game had the potential to be a cagey game dependent on the state of the game.  I also said any Arsenal team should deal with the situation comfortably.  We ran out 3-0 winners on the night (3-1 on aggregate).

My prediction was for a 3-0 win so I start off with 1/1 correct scores for the Arsenal.

Arsenal started the game with Cech, Monreal, Koscielny, Mustafi, Lichtsteiner, Guendouzi, Xhaka, Iwobi, Ozil, Mkhitaryan and Aubameyang.  The Arsenal came out of the blocks fast with some great passing and high tempo football with both wing backs playing up high and Ozil buzzing around the pitch picking up the ball and moving forward.  There were early signs that it was going to be a long night for BATE when Guendouzi picked out a lovely pass behind the defense for Auba to force a corner. A minute later Arsenal had the important breakthrough.  Aubameyang again getting behind the defense and playing a cross into the six yard box which wasn’t dealt with properly.  BATE defender Volkov clipped the ball into his own net and so some of the nervous tension was released.

Arsenal had chance after chance in the first 10-15 minutes.  They should have put the game firmly in their hands by the time BATE had their first chances.  BATE came forward after going a goal down and got behind us only for a shot to be hit wide, under a minute later the warning wasn’t heeded as a ball into the box found its way to an unmarked player at the back post 10 yards from goal.  Lichtsteiner reacted quickly to block the ball alongside the goalkeeper near the goal line.  If that goal had gone in the game could have taken an uncomfortable feel to it.

As expected we dominated possession but only seemingly creating half chances.  with shots being blocked by dogged defending and wayward shooting although Xhaka had a rasping shot saved by BATE keeper Shcherbitski.  Arsenal controlled the game into the latter part of the half adopting a little more patience with their play, maybe the key was to stop that away goal.  With 5 minutes of the half remaining we forced another corner which Xhaka took and Mustafi powered in a header to make the score 2-0 and very much in our hands.  The training on crossing paid off earlier in week and was obviously something that had been worked on.

We went in at the break 2-0 up and as it stood we were going through. The game wasn’t over as a goal for the away team changes the picture.  The second half started like the first with Arsenal bursting out and being positive with the ball.  Guendouzi was impressive throughout and it was evident that as soon as he got the ball he moved forwards. He had some good results and he almost scored with a bent shot into the far corner before BATE had a chance to test Cech which he dealt with.

Koscielny came off with what looked like a Calf injury so hopefully he won’t be out for too long.  He was replaced by Sokratis who himself has just come back from injury.  Almost immediately though Arsenal had another corner. The corner was put into the area again and Sokratis scored with a great header to make it 3-0.  Arsenal controlled and played the game out until the end. Meaning that we secured the win and qualification to the last 16 of the tournament.